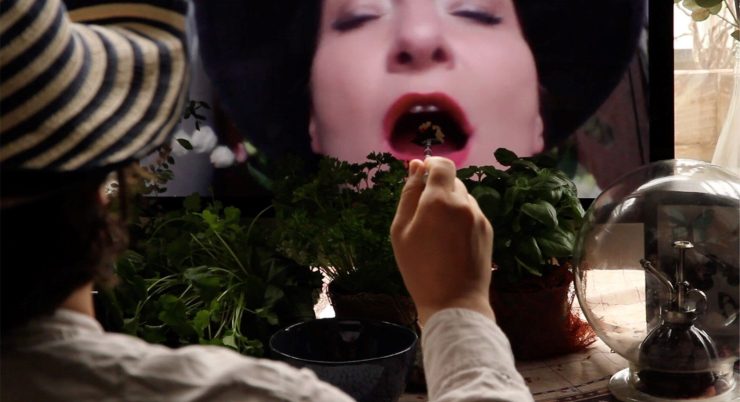 Artist filmmaker Tereza Stehlikova (UK/Czechia) will present a cross-section of her short films, with a focus on her relationship to landscape and place in general. The films explore how an environment can become an extension of our inner world and how it shapes our relationship to ourselves and other people. Stehlikova’s approach to visual aesthetics is informed by her research into how our senses nourish our being in the world and by extension, enrich the creative and emotional capacity of cinematic experience.

Most of the films which have been selected for this programme are inspired the unique genius loci of certain places, whether parts of Trieste, London, Montreal or Bohemia. The more recent ones also question what happens when our connection to a physical place becomes strained and how it impacts are human bonds. The programme also includes four films from 4 Generations of Women film series, an ongoing project which has begun in 2012. This particular series is both a record and a celebration of the women in the artist’s own female line.

An impressionistic documentary about the city Trieste exploring themes of belonging displacement and identity. The film weaves a narrative from fragments of personal histories of Trieste’s inhabitants capturing various migrant communities (Jews, Greeks, Serbians) that have made their home here, bringing their own religion and customs. Intertwined with these fragments are excerpts from Deborah Levy’s short story Swallowing Geography reflecting on the nature of belonging and displacement, permanence and ephemerality and the meaning of home.

A film that celebrates a particularly charged area of London, a forgotten in-between zone, a sprawling web of canals, railway lines, bridges, tunnels, pedestrian path, workmen’s cafes, graves and open spaces with large expanses of polluted skies… the film strives to see a closer place, alien, idiosyncratic and yet familiar. It enters into dialogue with its genius loci, capturing and preserving on camera and in word, before it is transformed beyond recognition by the notorious incoming Old Oak redevelopment. A collaboration with poet S J Fowler and inspired by a conversation with writer John Berger.

The following four films are part of a time-based project exploring the unique and often complex interconnections between four generations of women within the artist’s own family. Stehlikova began by staging small family rituals combined with documentary style footage, in order to explore the bonds between the women, while also touching on certain hidden traumas of the family’s past. Over time the process of filming has become a form of meditation, revelation and bonding, a ritual in itself. Primarily though, this series of films is a celebration of the power of the female line, in all its different expressions.

A short film made in response to my participation in in a conference about the senses and my time in Montreal, in October 2016. Sensorially tuned by the various talks I attended, I slipped away one afternoon to explore Jean Talon market and the power of sight to excite touch, taste and smell. A feast for the eyes alone.

Because we are no longer able to meet friends and lovers at a shared dining table, we have resort to virtual communication via computer screens. Taking this concept to an imaginative extreme, the film depicts an encounter between two characters: One „here“ and one behind the screen, as they seek to connect around a shared meal, through all their senses.

Tereza Stehlikova is a Czech/UK artist based in between London and Prague. She holds a PhD from the Royal College of Art, where she researched the tactile language of moving image. She is currently engaged in a cross-disciplinary research, investigating how moving image can be used to communicate embodied experience, by exploring multi-sensory aesthetics and embodiment. She is a founder of Sensory Sites (sensorysites.org), an international collective based in London, generating collaborative exhibitions, installations and research projects that explore multi-sensory perception and bodily experience. She also edits an online arts journal Tangible Territory (https://tangibleterritory.art/), featuring essays and articles by established artists/authors from the world of arts, science, philosophy and other disciplines, all centred around the role our senses play in creating meaning in art and life. Stehlikova regularly presents her research at international conferences and her films and performances have been shown at a variety of film and art festivals around the world (including Jihlava International Documentary Film Festival, 2017, and Prague Quadrennial of Performance Design and Space, 2019). Stehlikova’s ongoing long-term artist film project, 4 Generations of Women (capturing the complex relationships between four generations of women in her own family) has been Shortlisted for BFI 61st London Film Festival Experimenta pitch, presented at Svetozor Cinema in Prague and exhibited in a solo exhibition at Alchemy Film and Art Festival, in Hawick, 2019. She is currently participating in a large, mainly online exhibition Sensory Orders, in Gdansk. (http://www.sensoryorders.com/). Her project feature length film Disappearing Wormwood, exploring a disappearing part of north west London has been premiered at the Whitechapel Gallery in January 2020. Examples of Stehlikova’s work can be found on her blog: https://cinestheticfeasts.com/