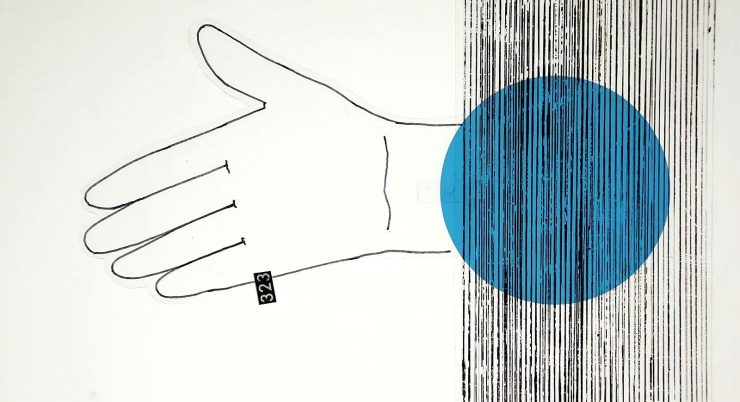 A personal selection of DIY and low budget productions of music clips made in Poland in the time between 2000 and 2021. All of the videos were made for avangarde bands outside the official music business. Most of them without a significant budget and producer, in small studios or literally at home. It makes them unique in visual styles or animation techniques. Curated by Aga Jarząb and Maciek Bączyk (kinoMANUAL)

Simple rotoscope animation based on selected scenes from Polish crime movies from 70’ and 80’. Pointing to a Marvel is a song from the best independent album of 2016 in Poland: Elite Feline by Lotto.

The author of this clip, Janek Koza is a well known comic book and satirical drawings maker in Poland. He started his art career in Wroclaw and became recognizable by his minimalistic and raw style. Despite his popularity, he has not broken off his strong ties with the DIY scene. His drawings and animations reveal typical Polish „poor (life) quality” and folksy sense of humor.

Łukasz Wojciechowski is an architect and perhaps that is why he creates his films in the autoCAD software. This simple animation promotes the album with the lost tapes of Crash, discovered years later, a significant representative of the Polish Jazz genre of the late 70’s. What is worth to point out that created in AutoCAD visual impressions are based on the most recognizable modernist buildings nicknamed Wroclaw’s Manhattan, made by Jadwiga Grabowska-Hawrylak.

Excellent combination of contemporary music with childrens spontaneity and energy of free creation. Images come from the Children’s Film Factory led by Alicja and Mariusz Jodko and a whole piece was presented at 9th edition of Musica Electronica Nova Festival.

This abstract composition of paper shapes and textures tries to illustrate the raw and harsh nature of the music piece.

European Union’s crises: echoes of Brexit in the European Parliament, refugees at the borders – you will find all of these very actual problems in the short animated music video for the song by Dutch duo – Zea & Oscar Jan Hoogland. Not only in song lyrics but in images captured frame by frame from riso prints as well.

Entropia Gallery is the best address for independent art in Wrocław. The Gallery was established in 1988 on the initiative of Alicja and Mariusz Jodko. What you will see is historical footage made on 16mm film, documenting Gallery long time mail-art practice. After 25 years, this silent documentary was combined with the independent, post punk sound of band Kristen.

In this animated music video minimal music follows the cardboard-head girl. Or opposite – the girl follows the music while looking for sth – her head, her integrality… Hand drawn animation, combined with cut-out and stop-motion elements is simple and complicated at the same time, as well as the sound of Przepych.

Unrestrained and free-flowing visual improvisation. The compositions of colors, shapes and textures follow the rhythm and melody of the song. The title “Kajtek” is the name of a real living dog who gave permission to the videomaker to use its image. Film is made manually using traditional cut-out animation.

A music video documenting the dance of the inner elements of a young townsman. An exciting combination of the film footage with 3D animation.

Cardboard, xerox machine, scissors, glue and lots of work. The author of this clip, highly talented musician – Marcin Ożóg, who one day decided to make a music video for his own song. Interestingly, he has never dealt with stop motion animation before. It took him a while, but it was worth it.

Kurws is a post-punk band from Wrocław, strongly associated with the local independent scene. Kurws is not only music. It is also a cooperative of visual artists, filmmakers and local activists, based on a still-living DIY strategy. So if you want a video for your song – Do It Yourself, preferably in good company.

A story about robots and human phantoms, narrated in Stanislaw Lem’s anniversary year. All images come from AutoCAD software visual imagery which makes this short film even more artificial.

Made without any previous scenario, the film was planned to be an author’s manifestation of emotional, economic and social freedom of professional restrictions. The world of a girl looking for her doppelganger is made of leftovers from other animation films.